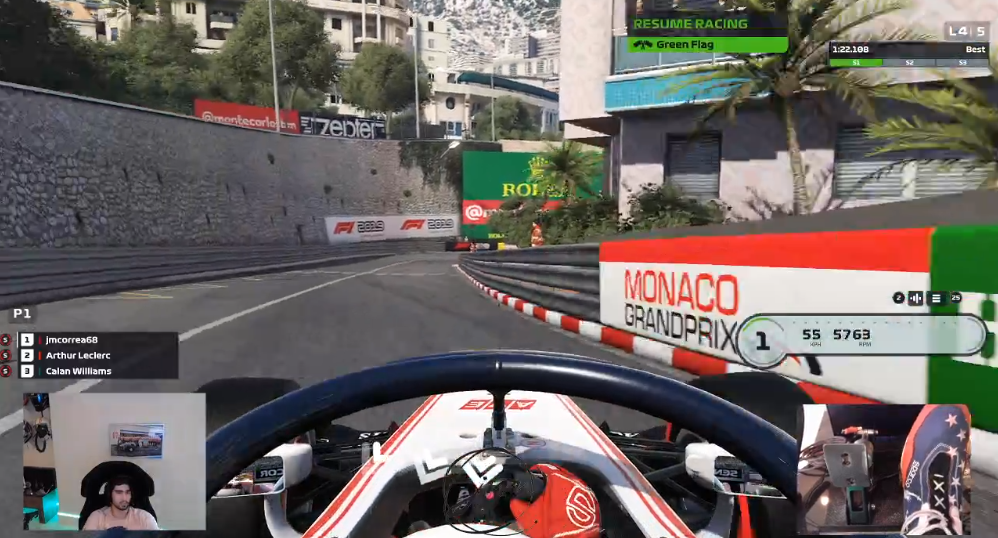 “JM was cruelly handed a pair of two-second time penalties just after he crossed the finish line and was demoted to P3.”

Charouz Racing System secured a win and an additional two podiums during the latest round of the F2 Virtual Racing Series on the streets of Monte Carlo earlier today.

Regular drivers Louis Delétraz and Juan Manuel Correa joined 17 other hopefuls on the grid for the third round of the sim racing series. Louis raced from Switzerland, while JM took the wheel from Miami in the USA.

An intense one-shot qualifying session produced a P4 slot on the Feature Race grid for Louis, while JM looked composed as he secured P10.

When the start lights were extinguished for the 21-lap race, both men made a positive start on the tight and twisty circuit. Louis immediately took P3 before turning that into P2 with a neat move down the inside of Arthur Leclerc at Portier.

The Swiss driver, twice an F2 podium finisher in Monaco, then set about chasing down leader Lirim Zendeli who was racing on the alternate race strategy.

Louis was on a mission and moved into P1 when the leaderboard equalised after the mandatory pit stops. And his assured drive for the remaining six laps secured victory by a margin of 19 seconds from Jack Aitken.

JM meanwhile, made excellent progress in the early phase of the race and was P8 on the third lap. However, he lost time a handful of laps later and dropped to P13.

But the talented American wasn’t done and he impressively fought back to P8 when the chequered flag dropped – securing pole for the Sprint Race into the bargain.

The Sprint was an intense, five-lap battle and JM impressively led the way for the entire distance.

However, he was cruelly handed a pair of two-second time penalties just after he crossed the finish line and was demoted to P3. However, the result did guarantee his first podium of the series.

Louis, starting from P8, showed the same pace that he enjoyed during the Feature Race and carved his way through the field to finish P2 – handing the team its third podium in two races and his fourth of the series.

The fourth and final round of the F2 Virtual Racing Series will take place on Sunday, 7 June at the Baku City Circuit in Azerbaijan.

“JM was cruelly handed a pair of two-second time penalties just after he crossed the finish line and was demoted to P3.”