F3 in Silverstone: Fraga has his first point, the improvement of the team is evident 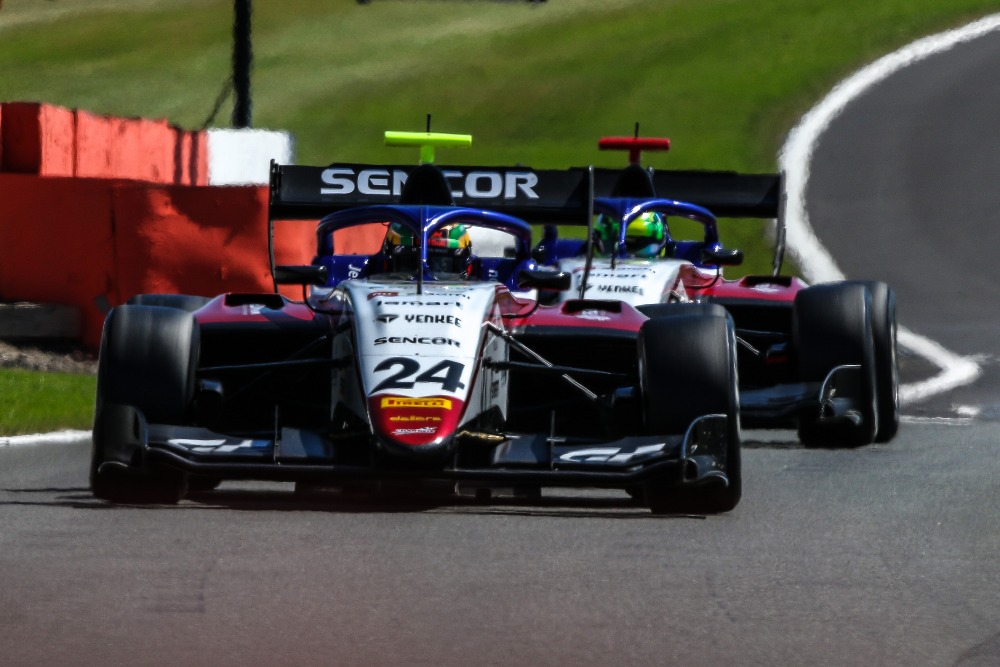 “We made a change already in the qualifications, which worked great especially in the second race.”

The prospects for Charouz Racing System were not so optimistic
after Friday’s qualifications. Even though Fraga, Staněk, and
Schumacher fought their way forward in Saturday’s race, it was not
enough to reach any points. But that changed in Sunday’s sprint;
Mr. Playstation, Igor Fraga, claimed the first point of the season with great driving and the necessary dose of racing luck.

If there were no qualifications in the FIA F3 Grand Prix, the Charouz
Racing System drivers would quite possibly belong into the top ten and
thus have a regular supply of points. In reality, however, the qualifications
are an integral part of the weekend – possibly the most important. Once
again, David Schumacher, Igor Fraga, and Roman Staněk did not do well
at the Silverstone circuit. Despite that, there is reason for at least a little
celebration after the races at the former military airport.

Saturday’s main race clearly showed that the drivers have speed. David
Schumacher moved up from the 22nd place at the start to a solid 15th
position. Igor Fraga started 26th and finished 18th. Roman Staněk also
improved by three places, although the 22nd place is nothing to celebrate.
However, this shows that the racing pace is not bad. Additionally, all
three avoid collisions, which is very important. As newcomers, they have
not yet been able to cope with Friday’s pressure and the need to drive fast
in a relatively short time.

Sunday’s sprint was thus marked by the qualifications and the first race;
the pilots of the Czech team had no choice but to battle. Right at the
beginning, Schumacher got innocently involved in a collision and the
race ended for him. Fraga, on the other hand, benefited from the clashes
and moved up to the 13th place, which he eventually improved by two
more positions. Shortly after, there was even more reason to celebrate.

Before having to wonder why the team finished empty handed again,
there was sudden news of a five-second penalty for Enzo Fittipaldi. Bad
luck for one Brazilian meant good luck for another; Fraga no longer has
zero in his points column, but one. Staněk also had a great race. After a
restart behind the safety car, he was the 19th and thanks to very skillful
driving he pushed himself onto the final 15th position.

Altogether, it is finally starting to look brighter. Fraga confirmed that it
could work. And if you add an average qualifications result, the Czech
team may finally have reasons to celebrate. The Charouz Racing System
drivers will be able to confirm the improving skills next weekend at the
circuit in Barcelona.

Antonín Charouz, the owner of the team, said: “All three drivers
showed that they are fast. On Saturday and Sunday they went many
places ahead. Unfortunately, David was unlucky, but Igor and Roman
performed well. I am glad that we have the first point, but we must
continue to work hard. Qualifications are still a problem, but perhaps in
Barcelona we will show that we are improving with our newcomers in
this regard as well.”

Jamie Dye, the team manager, said: “We had a good racing pace on
Saturday and Sunday. David was unlucky at the beginning of the sprint
and therefore did not get a chance to be part of the fight for points. We
want to start in Barcelona the way we ended at Silverstone. The main
goal is for the drivers to find a few extra tenths of a second in the
qualifications. Of course, we are working intensively on other things as
well.”

Roman Staněk claimed: “It was harder on Saturday, because we had
different settings than the other teams. I was not 100% in the first rounds.
The second race was better, I fought from start to finish and the points
were not so far. Towards the end, I started pushing more than the tyres
allowed, so I dropped a few places. There is still a lot of work on the car
from both the team and me as a driver. Of course we have to work a lot
on the qualifications, in Barcelona we would like to be at least in the top
15. We will analyze everything now and hopefully it will work out. I like
Barcelona, even though I have never raced there, I just tested with F4.
The track is very hard on the tyres, so it will depend on working with
them. And it’s a fast circuit, which could be good for us.”

Igor Fraga said: “We made a change already in the qualifications, which
worked great especially in the second race. The setup of the car was
perfect, I had much better stability and speed. We made a step forward
over the weekend. Barcelona will be a different track, temperatures are
also likely to be higher. Of course, it will depend on the qualifications.
Hopefully we will finally be able to get a better starting position for
Saturday’s race. But the circuit in Spain does not forgive anything, it is
very fast, so it will depend a lot on how long the tyres will last.

David Schumacher explained: “I had a good pace on Saturday,
unfortunately one of the opponents shot me down on Sunday and that was
it for me. I didn’t have a chance to stop it in any way. I think that we are
gradually improving, in Barcelona we will hopefully finally get the
qualifications. Then we can definitely fight for points, the ten is definitely
realistic.”

“We made a change already in the qualifications, which worked great especially in the second race.”