F2: Schumi’s lead began fading in Bahrain, Piquet’s performance was solid but without a fair reward 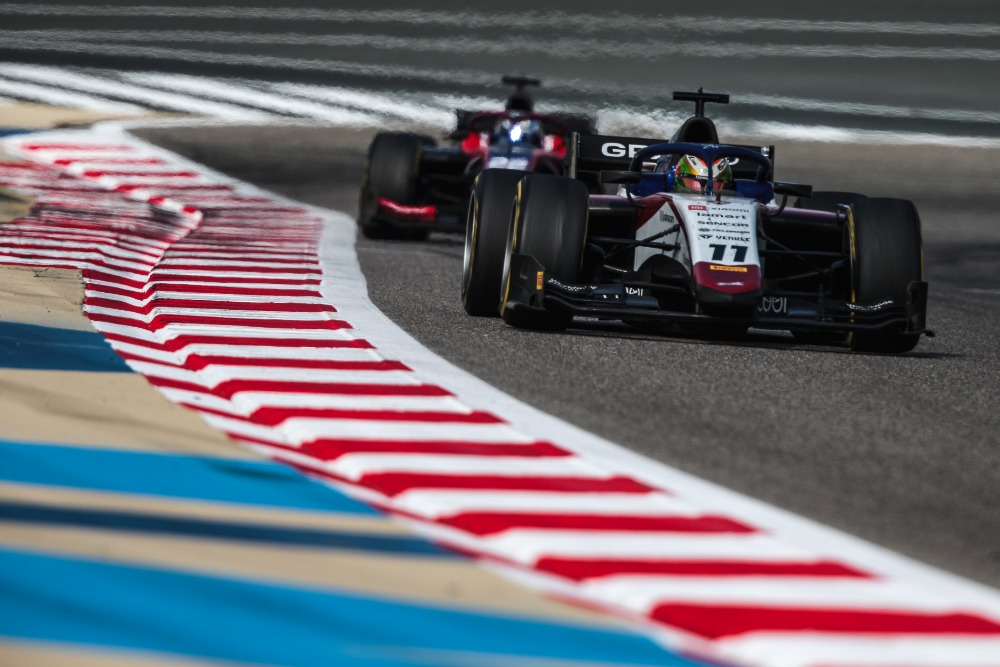 “The first race started with 32 laps at Arabian noon under a strangely obscured sky.”

The main F2 race during the last weekend of November in Bahrain was won by the Brazilian Felipe Drugovich, driving for the Dutch team MP Motorsport. The British Callum Ilott finished second, bringing him closer to the leader of the overall table, Mick Schumacher, with 12 points. Pedro Piquet was the most convincing of the drivers of the Czech Charouz Racing System team. The young Brazilian showed one of his best races of the season. In the end, however, he had to settle for the 11th place.

One of the anomalies of this complicated 2020 season is the fact that the FIA put Formula 2 on a two-month break after the September race in Sochi – just to set a kind of captivating final at the turn of November and December. This intense championship is waking up again while the world is at war with a new type of coronavirus.

Surprisingly, even after that long break, all the teams met again without changing the line-up (only Hughes took the place of the young Pourchair in HWA and Gelael returned to the cockpit of DAMS after healing from his last injury). Perhaps the biggest sensation, was what didn’t happen: Mick Schumacher was supposed to be the new Sauber-Alfa F1 driver. For unexplained reasons, the Swiss-Italian team will continue in 2021 with the completely uncompetitive Raikkonen-Giovinazzi pair and the management of the “little Schumi”, so obviously only the Haas-F1 team stays an option. However, the Russian Nikita Mazepin and the Mexican Perez are also going to the weak Ferrari farm with big money. It is probably certain that there will be a place for Mick in the team of the entrepreneur Gene Haas (already purely for PR reasons) – but the question remains will Callum Ilott, Robert Shwartzman, Guanya Zhou and other talents have time to move up to the most prestigious competition?

Ilott’s situation is precarious, because even if he wins the championship, he doesn’t really know where he will be in 2021. After yesterday’s qualifying race, he once again showed that he has more talent and speed than Schumacher. The former Charouz Racing System driver can hope for success. The Briton believed in himself: “No, I’m not nervous. The qualification went well and my first attempt was the right one, I could then relax. I have a chance to catch up on Mick’s points, and next weekend also.” Schumacher only managed to finish with the 10th best time, right in front of Antonín Charouz’s 11th (Louis Delétraz) and 13th (Pedro Piquet) drivers.

The qualification took place under artificial lighting; the first race started with 32 laps at Arabian noon under a strangely obscured sky. Callum Ilott was nervous, but after the starting lights went out he was surprised by the excellent Felipe Drugovich (MP), who stole the first place in the first corner. Mick Schumacher shot out like a rocket. He won 5 places after the first corner and in the first lap he overtook the fourth Zhou (UNI-Virtuosi). Piquet and Delétraz started the race a little shy and held positions 13 and 14. The order at the top then stabilized for several laps. Drugovich was one second ahead of Ilott, followed by Marcus Armstrong, Mick Schumacher, Giuliano Alesi and Dan Ticktum. In the 5th round, Delétraz overtook twice. His Dallara got in front of both the Russian driver Shwartzman and his teammate Piquet who was in the 12th position.

Three laps later, Armstrong (ART) overtook the Briton in the second place – the race continued to develop in Schumacher’s favor. In the next round, the son of the former champion took another big step towards the title, when he moved in front of his great rival Ilott. Mick then continued his great race by overtaking the other Armstrong later. Further back in the middle of the field, Antonín Charouz’s drivers swapped positions and 12th place now belonged to Piquet. The Brazilian and the Swiss were right next to Jack Aitken (Campos) and Jehan Daruvala (Carlin) in the first of the points. The well-tuned Piquet was able to overtake the experienced Aitken before the pit stop and immediately threw himself with pleasure and successfully at Renault junior, Lundgaard (ART). The son of a three-time F1 world champion simply performed one of his best performances of the year. That’s how the season is coming to an end.

Callum Ilott changed his tires after 13 laps, losing some time due to a problem on the left. Leader Drugovich took off his fresh footwear exactly halfway through the race and returned to the track a short distance behind Ilott. At the same time, Charouz Racing System called Déletraz and Piquet to the box. They stayed the longest of all and pit when he was fourth. It was nice to see the Czech car in front like this. However, the Brazilian returned to the track after the pit stop only after Lundgaard and Aitken, which he had previously overtaken. Piquet and Delétraz went to the final third of the race in the 14th and 16th positions, but the Brazilian soon had to let go of (future Alpha Tauri-F1 driver?) Yuki Tsunoda. For this, he later managed to subdue both Lundgaard and the Israeli Nissany again.

Leader Schumacher only changed his tires 12 laps before the finish, which in the end turned out to be too late. He returned to the track only as the sixth, just when Drugovich repeatedly overtook Ilott and took the lead again. Mick then quickly moved ahead of his teammate Shwartzman and 9 laps before the finish he got ahead of the fourth Armstrong. That was the end of his progress. For a long time, he could not endanger the fast moving Indian Daruvala. He threw himself at the junior Red Bull up to three laps before the finish and their beautiful duel showed what motorsport really is. In comparison the German retired wisely and settled for the fourth position. For Jehan Daruvala, this result was his first time on the podium.

Sensational Felipe Drugovich, whose career is financed by his father’s well-filled wallet, made no mistake until the finish line and won with a clear lead of 15 seconds over Ilott, who finished quietly in the second place. Pedro Piquet showed an excellent finish, in the last lap he managed to overtake not only Gelael, but also the holder of the fastest lap of the Ghiotta race. The Brazilian’s great performance would certainly deserve a better reward than the unfortunate 11th position. He was 1.8 seconds short of Aitken’s point. Delétraz drove the second car of the Czech stable to the finish line in the 16th position.

“The first race started with 32 laps at Arabian noon under a strangely obscured sky.”