F2 in Sochi: Delétraz finished far away from the points, only Piquet was within reach 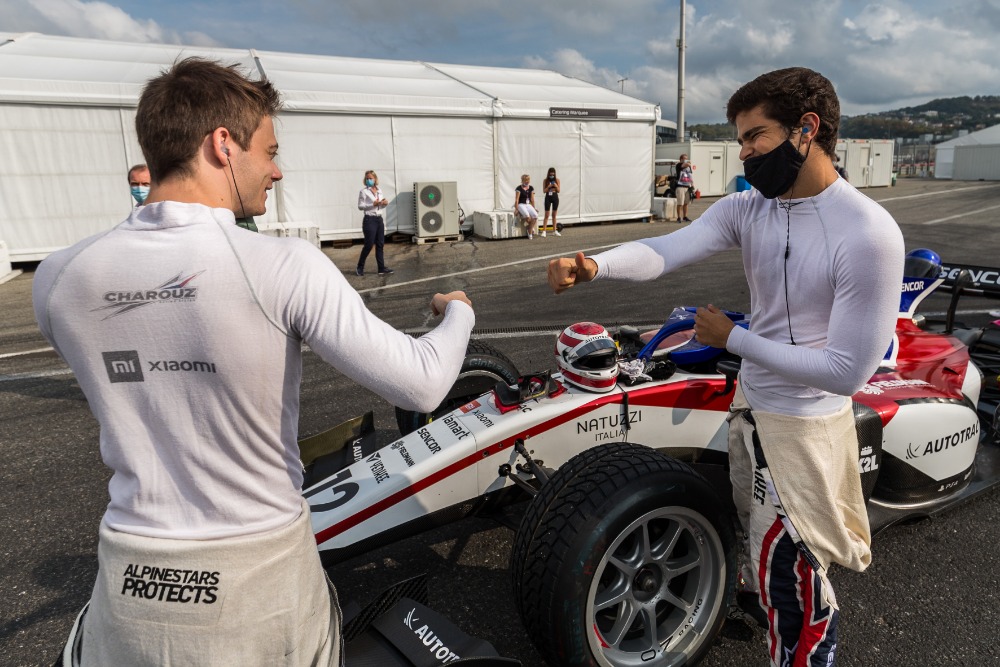 “We have to prepare well for Bahrain during the break, we definitely want to finish the championship better than in Sochi.”

This weekend of the Russian Grand Prix was not successful for the Charouz Racing System. Louis Delétraz seemed to have lost the determination he was proud of during the last weekend in Mugello. Pedro Piquet had a lot of bad luck on Sunday; his promising race was ruined by a red flag after a nasty accident. The FIA-F2 championship now has a long break ahead, as everyone will not meet until the end of November in Bahrain.

Accidents marked both days. In Saturday’s main race, both Charouz Racing System cars got involved in a mass collision after driving only a few meters. For both Delétraz and Piquet, the race basically ended. The Brazilian in particular tried to move forward, but just before the finish line both drivers had to go back into the pits. That marked the last hopes for a passable result. In addition, the Swiss was penalized twice during the race.

Delétraz and Piquet entered the grid of Sunday’s sprint determined to repair their tarnished reputation. And again, the Brazilian was doing better. The Swiss driver seemed to have his thoughts elsewhere, perhaps in Le Mans, where he went back during the week and apparently forgot his form somewhere along the way. On the contrary, Piquet fought his way forward when the race was once again affected by an accident.

Ghiotto and Aitken’s shocking crash came just when Piquet was within reach of the points. That was a respectful performance as he has started the race in the seventeenth position. Unfortunately, the rules speak for themselves – in the event of an accident, the positions of the round before the incident are decisive. And unfortunately for Piquet, this meant only the ninth place, while the two “sinners”, who fortunately left their wrecked cars by themselves, credit the points to their accounts.

Yet another peculiar event involved Mick Schumacher, whose joy from yesterday’s victory carried a tiny stain. The commissioners discovered a non-homologated DRS engine in his car. The FIA took a suspicious look into it. However, the head of the Prema stable, René Rosin, participated in the German’s tire change from the box wall (and thus actively participating in the operation as an illegal additional team member). The four other teams did not watch along carelessly and protested. Rosin was fined 10 000 Euros and the case was settled. Mick is really starting to prove himself worthy of his name. His father is still nicknamed “Schummel-Schumi” (Cheater-Schumi) by critics because of similar “irregularities” in 1994. In any case, this event does bring suspicions to Schumacher’s miraculous acceleration during this season.

F2 teams will have a long two-month break. The season will finish with two events in Bahrain on the last weekend of November and the first weekend in December.

Antonín Charouz, the owner of the team, said: “We definitely cannot be satisfied with the races in Russia. Unfortunately, Louis was not able to quickly adapt to another type of car after Le Mans, and it was clear in his performance. Pedro drove great especially on Sunday, he would probably have finished within the points. The most important thing, however, is that Ghiotto and Aitken escaped the accident healthy. We have to prepare well for Bahrain during the break, we definitely want to finish the championship better than in Sochi.”

Bob Vavřík, the team manager, said: “We didn’t qualify on Friday, even though we had speed. On Saturday, our drivers were part of a mass crash after the start, neither can be blamed. We lost many positions so the starting position for Sunday’s sprint was not great. Nevertheless, Pedro moved forward and it is a pity that another accident ended the race. In the case of a restart, he would certainly have managed to reach the points, but they would not have had time to repair the barriers and have the GP F1 start in time. We will now prepare for the last races in Bahrain and will have tests there. In the meantime, we have F3 testing and a lot of work on new drivers for the next season.”

Pedro Piquet claimed: “The qualification was not good, which affected the starting position. And on Saturday we were unlucky right at the beginning because we were innocent in a mass accident. Unfortunately, even on Sunday, the race was interrupted due to an important crash. I was very close to points, but that’s motorsport. I want to rest now, we will definitely analyze the Russian races with the team and will also look at the track in Bahrain so that we can show the best possible performances there.”

Louis Delétraz explained: “It was a really bad weekend for us. Qualifying was difficult on Friday. We were not as fast as in Monza or Mugello. Unfortunately, we started in the middle of the field on Saturday. We then lost everything at the beginning of the main race, when we got into a collision of several cars. The race was interrupted on Sunday and I don’t really understand why the cars that caused the race to end still get points. But those are the rules, it doesn’t change anything on the fact that we had a bad weekend. It’s time for Bahrain, I’ll rest and work with the team.”

“We have to prepare well for Bahrain during the break, we definitely want to finish the championship better than in Sochi.”