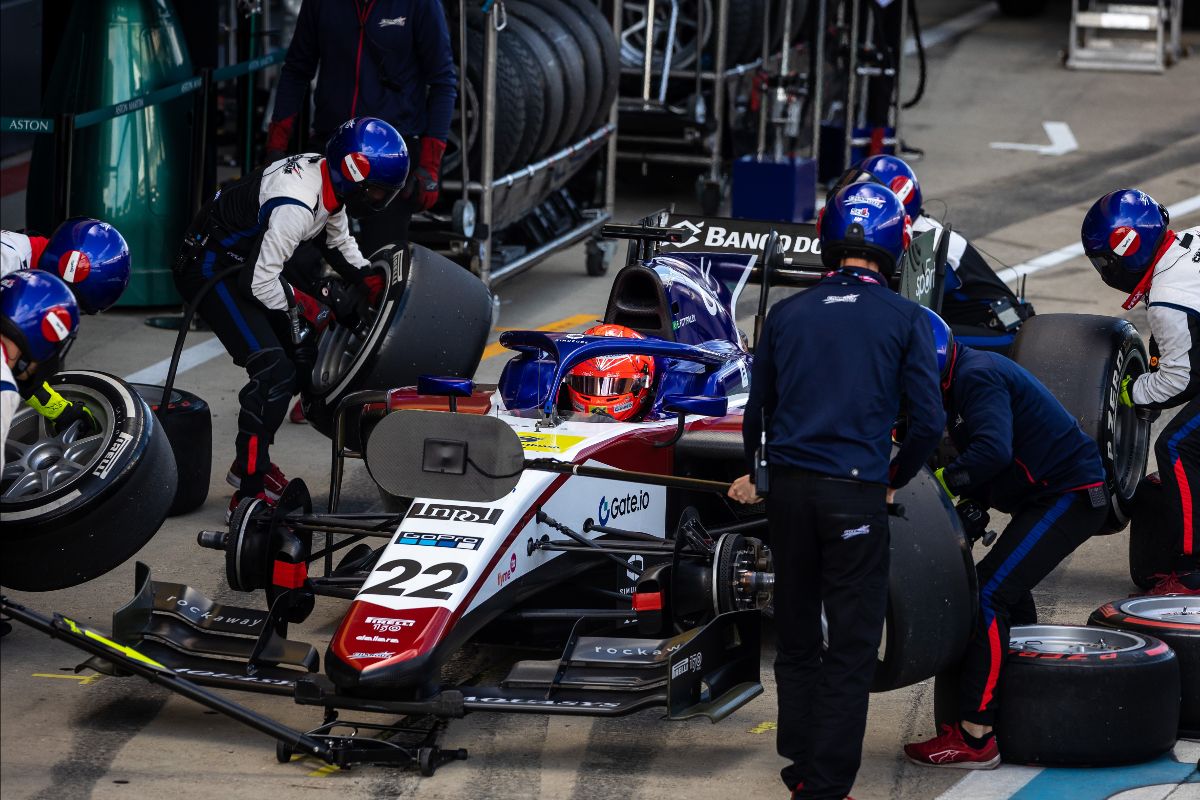 “It’s been another good one for me, it felt so good to be on the podium again.”

Charouz Racing System had another very positive weekend in its 2022 FIA Formula 2 campaign at Silverstone, England. Enzo Fittipaldi and Cem Bölükbasi were really quick on the legendary English track right away from Friday, with the former getting another trophy home for the Czech team in a difficult and tricky Sprint Race.

Things started on the right foot since Qualifying for the Brazilian, that managed to stop the clock at 1:39.077 getting the 9th fastest time and the chance to start from the front row on Saturday. After the rolling start on a wet track, Enzo fought hard for the lead in the first half of the race before a drop in the performance of his tyres forced him to go on defense while the track was getting drier lap after lap.

A superb and smart drive eventually got him keeping P3 until the end and earned him the second podium of the season after the P2 conquered at Imola. On Sunday Fittipaldi was once again battling for the top 5 but after the pit stop he lost a bit of speed on the harder compound and had to settle for P11, just 8 tenths shy of the top 10.

Less effective but still a solid performance also for Cem Bölükbasi. The Turkish rookie is still looking for his first points but, in a very demanding weekend on a track where he never raced before, managed to stay out of trouble and get to the chequered flag in both races, continuing in his learning path at the wheel of an F2 car.

Fittipaldi is now P9 in the Driver Standings with 55 points, just three points away from the top 5, while Charouz Racing System is P7 in the Team Standings. The FIA Formula 2 participants will now face the third back-to-back of the 2022 calendar, racing next weekend at the Red Bull Ring in Spielberg, Austria.

Antonín Charouz, team owner
“It’s been a demanding weekend, especially because of the weather conditions, and I’m really happy about the performance delivered by the whole team. Enzo deserved his second F2 podium, he’s been really fast and consistent in the last months so for us this isn’t a surprise anymore and we’re all hoping to see him on the top step of the podium within the end of this season. I’m also happy about Cem being able to face a new track in this difficult conditions and getting the car to the finish line without any mistake or being involved in some messy situations, I’m still sure his first points will come very soon. Now heads down and let’s keep this momentum going at the Red Bull Ring”.

Enzo Fittipaldi
“It’s been another good one for me, it felt so good to be on the podium again. Friday was a really good day, qualifying ninth and having the chance to start second in the Sprint Race, which was difficult but eventually turned out to be very good for us, getting the second podium of 2022. We had the pace to fight for the top positions also in the first stint of the Feature Race, it was a very close battle but then in the second stint I lost a little bit of speed. In the end it was another very positive weekend, we keep improving, we’re always able to find the right setup and that allows me to get more and more confident with the car every session. Now onto the next weekend at Red Bull Ring”.

Cem Bölükbasi
“I must say I had a very positive Qualifying session, I think that was the closest I’ve ever been to the pole position lap time this year. In the two races we’ve been a bit unfortunate as we couldn’t put the tyres in the correct temperature window and we need to analyze that, but we’re continuing to improve in every race and now it’s already time to get ready for the next round in Austria”.

“It’s been another good one for me, it felt so good to be on the podium again.”